The following is my interpretation of photograph  p48-14-173 from the SPRI – Freezeframe  collection . 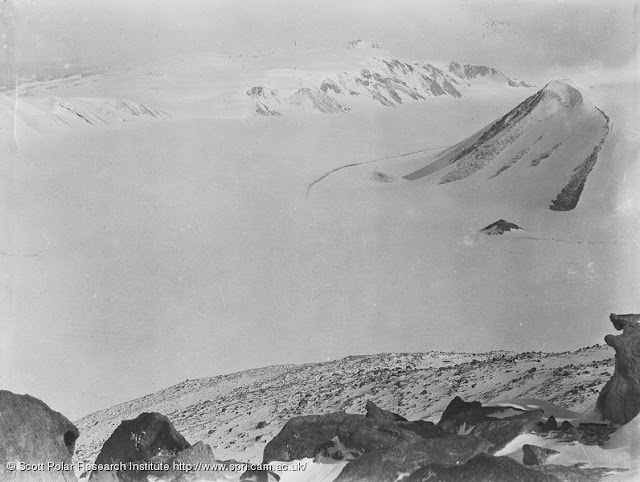 My description of scene.

A view, across the entrance to the Boomerang Glacier and south down the  Browning Pass, from high on the  northern side of the entrance to the glacier.  Mount Abbott can be seen as the highest peak in the centre top of the picture.  This photograph was taken, by Levick, on the 20 January, 1912  during the climb by Campbell, Levick, and  Dickason.  The photograph also shows the position where on the 12 January the Northern Party camped during their travel up the Browning Pass.  The campsite was near the end of the curved moraine in the centre of the photo. 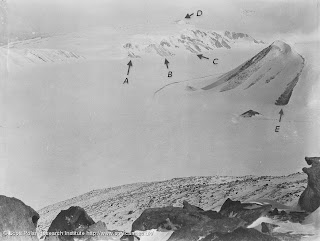 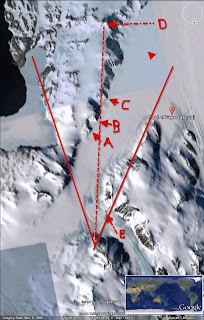 Included  on the second image are the solid red lines representing the camera’s angle of view. The peak in the centre top, marked D, is Mount Abbott.  These two images show the photograph was taken from the heights above the northern side of the Boomerang Glacier.
Date Photo was taken.
The  photograph was taken  on 20 January, 1912.  On this date  the Northern Party had split up into two groups, one lead by Priestley and the other by Campbell. Campbell’s group climbed  the northern  side of the entrance to the Boomerang Glacier.  This is the only time such a climb is mentioned.
The Photographer.
Levick.  With Campbell that day was Levick and  Dickason.  Levick being the photographer it is reasonable to assume he was the photographer.
Associated photos
Other photos taken during the climb and from roughly the same position are:
P48-14-171,  P48-14-172.
Photographs taken at the glacier level and including the entrance to the Boomerang Glacier are: P48-14-115, P54-16-271, P54-16-272, P54-16-386kk.
Posted by Don